NEX is a Name Category of creatures that first appeared in DM-32 Evolution Saga, and primarily appear in the Divine Evolution Saga block (DM-32 to DM-35).

Toppa Lupia from DM-33 Rising Dragon was the first card to mention NEX in its card text, thus marking NEX as a category.

All NEX creatures are fire civilization Armored Dragons, although Psychic NEX, the Awakened Blue Flame starts off as the Fire Bird creature Master Lupia, Temporal Wing on their lower cost psychic side. They have close interactions with several creatures from the Lupia category such as Cutie Lupia and Galaxy Lupia.

Creatures in this category have unique designs. They either resemble the sun (like in Rising NEX, the Enlightened) or have spirals on their bodies (like with Bolshack NEX). Similar features can be found on Jack Raidou, Battle Dragon.

NEX creatures do not feature a common ability, and a synergy to build between them is difficult. They have been designed to be independent of each other so it can be hard to feature them all in the same deck.

Any creatures that have 'NEXT' (Such as MaltNEXT, Super Battle Dragon Edge) in their name are unaffected by cards that affect NEX creatures as the kana on top of their 'NEX' is different.

Cards that support the NEX category

Cards supported by the NEX category 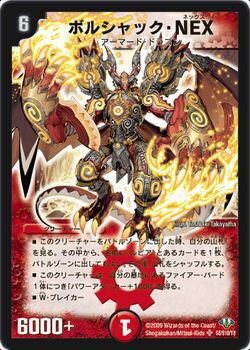