Mutopia is a race of creature in the Water Civilization.

There are 3 factions in the Mutopia race. This includes;

They don't have a specific naming convention but many have real life aquatic fauna in their names.

They are a group of creatures that lived in vast underwater cities that are supported by Massive Whales, and claim to be a pacifist organization. However, they are secretly arming themselves with magic, and not even the sage of the civilization Octopa, Sublime Knowledge knows the reason behind this. 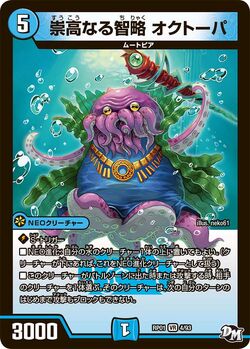 Retrieved from "https://duelmasters.fandom.com/wiki/Mutopia?oldid=366397"
Community content is available under CC-BY-SA unless otherwise noted.