Milkboy is a race of creature in the Nature Civilization.

All Milkboy creatures are Initials, and weaker Milkboy Initials are named "Bei B". This could be a pronunciation pun on the word "Baby".

Each creature with the Milkboy race has certain attributes:

They are a race of Initials who appear as babies. However, despite their cute and infant-like appearance, they are capable of extreme strength. They were all wiped out by Team Damama. 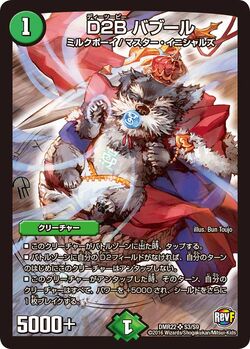 Retrieved from "https://duelmasters.fandom.com/wiki/Milkboy?oldid=419575"
Community content is available under CC-BY-SA unless otherwise noted.