Metallica is a race of creature in the Light Civilization.

While the race was first previewed in DMR-23 Dogiragolden VS Dormageddon X, the last set in the Revolution Final block, they were released in greater number in DMRP-01 Here Come the Jokers!!.

In the Ten Kings block, they have been paired with Team Ginga.

There were 3 factions in the Metallica race. This includes;

This later expanded in DMRP-02 All So Truly B・A・D Labyrinth!! and DMRP-03 Feeling Joejoe Meraventure!! sets with the DG category of creatures, as well as being paired with Master Dragon and Sabakist.

Gacharange Creatures are named after renaissance artists. This includes

Many of their cards have abilities that involve tapping their own players creatures, as well as changing your opponents creatures target to themselves or your other tapped creatures.

While initially exclusive to the Light civilization, they later appeared in the Zero Civilization as DG creatures.

After DMRP-04裁 The Rise of Master Dragon!! ~Judgment for Justice~, they started to be paired with the Special Race of Sabakist, as well as with Master Dragon.

They are one of the lifeforms taking the place of Dragons in a world where Dragons went extinct due to the fallout of the battle between Dormageddon X and Final Dogiragolden.

The Golems are giants made of minerals and are summoned by the Silvermen while the Ores are controlled by them. They live in the top of the world pillar and are ruled by a one eyed king, Ov Sidia. They are opposed to the Mafi Gangs and Beat Jockeys. They are also known as the Labyrinth.

Recently they are planning to revive a Dragon using Joe Kirifuda's dragon drawing, presumably using it as a weapon. 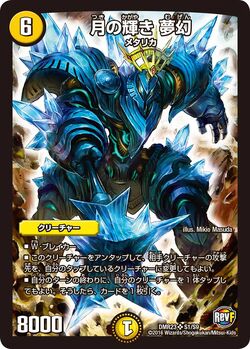