Mega Dragon is a race of Dragon creature in the Fire or Nature civilizations.

Many of the lower costing creatures of this race (which are Hamsters), feature some form of カツ (Katsu) in its card name, as well as a number, 1, 2 or 3.

They are a lesser race of Mega Command Dragon to prevent them to be abused with the Invasion ability as well as being unable to remove seals.

They are paired with the Revolutionary team race, Team Hamukatsu.

Mega Dragons are affected by all cards that affect Dragons, but currently there are no cards or evolution creatures that specify Mega Dragons 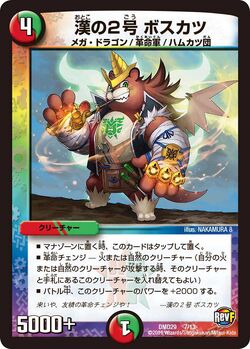