Most of them are Evolution Creatures before DMR-18 Seize the Moment, Miradante!!.

It produces many iconic and high card power creatures that would change the face of the game itself, including Mega Manalock Dragon which renders multicolored decks unfunctionable, Mega Magma Dragon that wipes all weaker creatures, The legendary Dogiragon Buster, Blue Leader who change the face of the Metagame to its favor all by itself, and Bolshack Dogiragon, a powerful but highly unstable counter defense card.

They are usually quadrupedal dragons who are clad in heavy, futuristic armor. They are sided with the Revolutionaries.

In Revolution Final, they are teamed up with Team Hamukatsu.

Evolution creatures with the Revolutionary race have "革命龍" (Kakumei Ryuu, Revolution Dragon) as a suffix, save for major creatures which are named "___革命", with ___ being an adjective.

Evolution creatures without the Revolutionary race are named "Gou ____ Dragon" (ゴウ・____・ドラゴン), save for Evol Dogiragon. 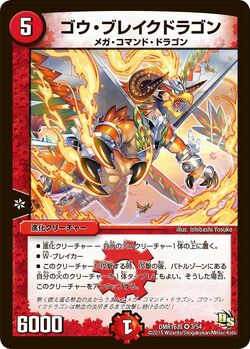 Retrieved from "https://duelmasters.fandom.com/wiki/Mega_Command_Dragon?oldid=419539"
Community content is available under CC-BY-SA unless otherwise noted.