Master Dragon is a race of Dragon creature in the Light and Jokers civilizations.

It first appeared on a promotional card, Savark ~Judgment for Justice~ and Kirazeus Savark in the Light Civilization paired with Metallica.

It later appeared paired with the Jokers race.

Other Master Dragon races include;

All of these creatures are Dragons that are reborn in a world where all Dragons went extinct. They are the only Dragons in the new world that are not Dragon Guilds. 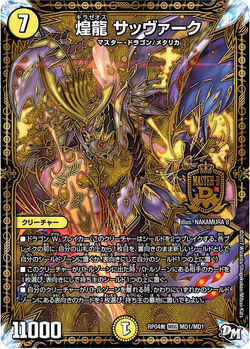