watch 02:34
Wiki Targeted (Games)
Do you like this video?
Play Sound

In order to help Shobu on different occasions, she has occasionally taken on the persona of a second "Dragon Mask" and challenged him.

Some time before the regional tournament, she along with Katsuzo and Shobu have arranged challenges for Katta to ensure that they might help him improve his skills and make it through the national tournament.

Just like helping Shobu as "Dragon Mask", she takes on a role as "Lady Clay Pot" in order to help Katta in his second challenge before the nationals. Fortunately Katta does not recognize her at first sight. When Lulu asked her why she was here in the town, she replied that she was helping him to prepare for the Duel Masters National Tournament, like how she helped his older brother Shobu in the past.

She gave Katta intense training and Onimaru "Head", Victory Rush before their duel. She uses the same cards Katta uses in the past the duel. In the middle of the duel, she made Katta arrange the cards on his side of the duel table back in proper order. She kept a cool atmosphere and managed to gain an upper hand. When Katta replied that this draw will determined the outcome of the duel, it reminded her of Shobu and his belief in the cards.

He draws Onimaru "Head", Victory Rush, gaining an extra turn by its Gachinko Judge ability. Katta was aware that he was battling his own mother and command a direct attack,and she lost the duel against her own son. When Dobin Sensei gave Katta Gigaheart, Invincible King Sword / Ohginga, Strongest Passion, she tells him to take it as he deserves this new card and it will help him in his final challenge. When Katta and Lulu departs to Shobu's location she was happy that her own son became stronger like his brother, setting hopes that he and Shobu will be reunited.

She along with Dobin Sensei, Katsuzo Kirifuda and all of the students of the school watches the finals of the National Tournament in the school halls. After Katta gained victory, she celebrates with the students and Katsuzo and was embarrassed when Katta was in his usual silly antics live, much to the amusement of the teachers and students in the school.

She watches the news of Katta's final battle against Dormageddon X. After Katta and the creature spirits put the end to the apocalypse, she was glad that it was all over.

7 years after the fateful event, she attends her second son's wedding together with her husband and first son. After the ceremony, she along with the other guests sees Katta presents 3 year old Joe Kirifuda. She was quite surprised by the revelation that Joe Kirifuda was Katta and Lulu's child, making her Joe's grandmother.

Appearance from Season 1 and Sacred Lands 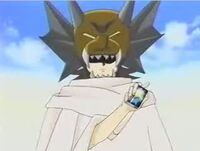 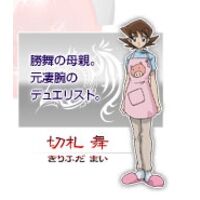 Mai's appearance as 'Lady Clay Pot' from Duel Masters Versus

Retrieved from "https://duelmasters.fandom.com/wiki/Mai_Kirifuda?oldid=291328"
Community content is available under CC-BY-SA unless otherwise noted.