Mafi Gang is a race of Gang creature in the Darkness Civilization.

The devils feature "" # (Misfortune Demon #) in their name, with # being a number.

There are 3 factions within the Mafi Gang race. This includes;

Shadowed people resemble tall, shadowy figures in royal clothing or armor they are equivalent to Demon Commands. The Doctors vary in appearance from undead beings to dolls, but they all wear a doctor outfit or hold items such as syringes. They are the equivalent to Dark Lords. The Devils vary in appearance from bipedal humanoids made of straw or armor to large, mechanical monstrosities, but most only have one, lamp-like eye in the center. They are the equivalent to Living Dead or Chimeras. If the Devils are of the Super Rare rarity, they will also have the Demon Command race. The reason for this is unknown.

The Shadowed people rule over the Darkness civilization and provide the materials required to create Devils to the Doctor Corps. However, nobody knows where the materials came from, and while their purpose is to destroy all other civilizations, for an unknown reason didn't fight with all of their might.

They have a focus on standard graveyard strategies, such as reanimating creatures. Due to this, they can easily create graveyard loops or fill the battle zone with heavyweight and lockdown finishers.

Recently, they are focused on supporting the Gate of Moonless Night ability with the Dolszak races.

The race is sometimes paired with Mugettsu and Magic Tool. 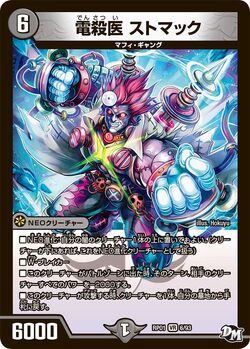