Machine Eater is a race of creature in the Fire Civilization.

Machine Eaters are unusual in the sense that they have no creatures that they can be evolved into.

Machine Eaters are small, cute humanoids with chubby, childlike bodies. Standing only a foot tall, they are always found in groups. Machine Eaters love to play and hate to be restrained. With their high-pitched voices and noisy nonstop chatter, they exude an optimistic and cheerful attitude.

Machine Eaters are gifted with the highest engineering ability in the Fire civilization. In return for their cooperation with both Humans and Dragonoids, they are allowed access to their discarded machinery. These broken, discarded machines and building materials become housing, vehicles, weapons, and everyday items in the creative hands of Machine Eaters.

Rock Eaters are a wild species of Machine Eaters. They wear a shell made of a thin layer of rock and magma and resemble small Rock Beasts.

Machine Eaters have also been credited to the construction of a large number of the Fire Civilization's weaponry, such as the Spastic Missile and the Crimson Hammer, as well as being responsible for the creation of the Xenoparts. 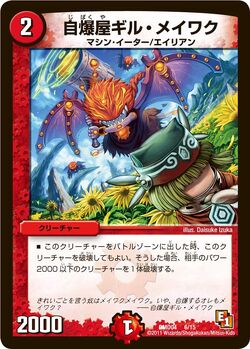