Lunatic Emperor is a race of creature that is shared between all 5 civilizations.

Each Lunatic Emperor features (Shinra) "the Enlightened" as a suffix.

Each Lunatic Emperor has the Ultimate Evolution keyword (Put on top of an Evolution creature) as well as Double breaker, Triple breaker or even Quattro breaker.

Also, all Fire creatures with the Lunatic Emperor race also have the Armored Dragon race, and all Water Lunatic Emperor Creatures released in the Divine Evolution Saga have the Cyber Command race.

Lunatic emperors often have high costs (more than 5), and high power (usually 11000 or more, although ones from the Water civilization have lower power), and usually also have a powerful effect, such as Skull Moon, the Enlightened's ability to destroy any of your opponent's creatures regardless of their destruction substitution effects when it is about to be destroyed due to the double substitution effect. 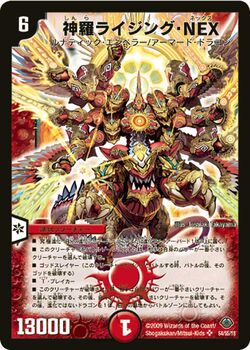