Luna's Sun Geyser is a race of creature shared between the Water, Fire and Nature civilizations.

The name of the race, Luna Sun Geyser translates into "Moon's Sun Geyser".

Each of them features additional races and have (Chō Shinra) meaning "Super Enlightened".

Each Luna's Sun Geyser creature has the Ultimate evolution MAX keyword, includes "Super Enlightened" as a suffix, as well as Triple breaker or even World Breaker. They all have the same Moon symbol credited to Lunatic Emperor creatures, and also an image of the sun like the one that appears on Rising NEX, the Enlightened.

Due to their complicated and difficult way of evolving, they are generally considered Overkill and usage of them in competitive play is usually not recommended. 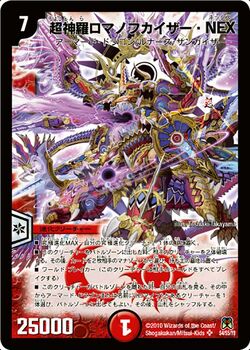