Lost Crusader is a race of creature exclusive to multicolored cards.

Each Lost Crusader features (Gaia) as part of their name with the exception of Atakamaito Q, Blinding Speed and Ultimate Man.

They represent servants of the Gods.

They each have abilities that work together with multicolored cards, and are the only race of creature to have the Lost Prism keyword.

In their later DMR-03 Episode 1: Gaial Victory cycle of creatures that are also part-Alien, they feature a Space Charge ability for the 2 civilizations the creature belongs to.

They were also included in the DMBD-01 Chronicle Legacy Deck: Alcadeias Requiem deck. 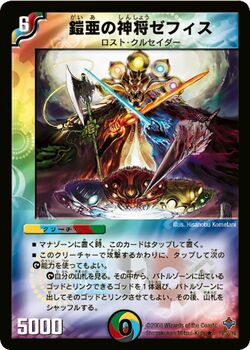 Retrieved from "https://duelmasters.fandom.com/wiki/Lost_Crusader?oldid=318631"
Community content is available under CC-BY-SA unless otherwise noted.