Liquid People Sen is a race of creature in the Water Civilization.

To help the weak and punish the bullies, they created an organization of heroes where they attack in many numbers, give knowledge to the weak, learn to strengthen their suits and break their limits through intellect. 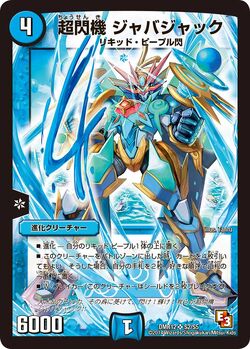 Retrieved from "https://duelmasters.fandom.com/wiki/Liquid_People_Sen?oldid=419472"
Community content is available under CC-BY-SA unless otherwise noted.