It is based on Dogiragon Buster, Blue Leader's Revolution Change to swarm the opponent with multicolored creatures. The deck has strong one-shot potential and packs several cards that heavily restricts the opponent's ability to counterplay, such as Onikamas, Strange Flow, Mixel, Strange Stone / Jamming Chaff and Sido, Time 3.

While its previous numerous incarnations of the deck, such as Five Color Dogiragon Buster and Water Fire Dogiragon Buster among others experienced great success in the metagame, Hall of Fame updates hit them hard. This incarnation first appeared in the DMRP-04魔 metagame due to Dorgan Churis being released. It originally featured Katsuking Jr, Kung Fu Generation, but later dropped it in favor of anti-metagame cards.

Sido, Time 3
Add a photo to this gallery

In the early turns, the focus should be on getting Dorgan Churis, Dogiragon Buster, Blue Leader and if possible, Valchuris, Dragon Armored. Putting multicolored creatures into the mana zone is recommended for Dogiragon Buster's Come Into Play with the added bonus of preventing color accidents.

On turn 3, if key components are in their appropriate zones, summon Dorgan Churis and Revolution Change into Dogiragon Buster and use its effect to put Rafululu, Sound Faerie or multiple copies of lower costing Multicolored creatures into the battle zone. Valchuris, Dragon Armored can then be put into the battle zone for no cost during the second attack.

If key components aren't in their appropriate zones, focus on drawing them by using the deck's draw sources. At the same time, disrupting the opponent and setting up the battle zone is key. Magnum, Shortshot, Sido, Time 3, G.W.D, Rumble Machine, Memento Guardian Shrine, Prison Court of D and additional copies of Onikamas, Strange Flow and Mixel, Strange Stone / Jamming Chaff should be put into the battle zone.

Removing the opponent's anti-meta cards are also a priority. G.W.D, Rumble Machine can be used against most creatures, except for Onikamas, Strange Flow, which the standard version of this deck has no effective answer to. Aside from Dogiragon Buster, this deck has low creature power and few breaker abilities and should be played as such. 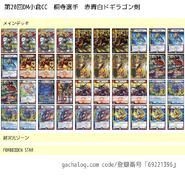 Template Light Water Fire Dogiragon Buster as of April 2019.
Add a photo to this gallery
Retrieved from "https://duelmasters.fandom.com/wiki/Light_Water_Fire_Dogiragon_Buster?oldid=385506"
Community content is available under CC-BY-SA unless otherwise noted.