Knight is a race of creature that is shared between all 5 civilizations.

There are 4 noble houses within the Knights;

Houses of the Knights
Demonic Eye

Although Nature and Fire Knights apparently do not belong to one of these noble houses, they still feature shared titles. While Nature Knights often feature "Wild Beast" as part of their name, Fire Knights often have "Explosive" as part of it. There are also some Knights with the Samurai race. Those are called "Wolves" or even "Blue Wolves".

Creatures with the Knight race always feature another race.

Knight is also notable for being the first subtype to be attributed to spells (followed by Great Muda and Great Thanks and Jokers), although this only applies to spells with the Knight Magic

This allows you to reuse their effects if you have a Knight creature in the battle zone.

Creatures that evolve from Knights 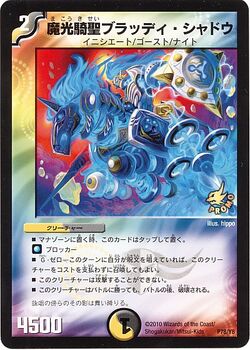 Retrieved from "https://duelmasters.fandom.com/wiki/Knight_(Race)?oldid=391478"
Community content is available under CC-BY-SA unless otherwise noted.