Kira is a new generation duelist first introduced in the Versus Revolution Final season of the Duel Masters anime.

He's Joe Kirifuda's childhood friend and rival, and is a year older than him. He's also one of the Duel Masters of a new generation. Due to his mother's influence that darkened his thoughts and "justice" even further, he was considered as a major antagonist that might lead to the destruction of the balance of the creature world. In later series, he became a regular among Joe's team.

He is a blonde, spiky-haired boy. He is at least 3 times taller than Joe, despite him being just a year older than him.

At the age of 11, he replaces his white scarf for a red one given by Joe.

His appearance changes during the 10 Kings arc. His outfit consists of a yellow coat, white pants and shoes. He still retains his red scarf.

Although he is a kid around the age of Joe, for some reason his dueling skills rivals those of the strongest rivals Joe's Father ever faced even when he was around 8 years old, making him literally a prodigy.

Outside of dueling, he also always beats Joe in any kind of competition, even dueling. He was shown to be quite calculative, as he have noted down all of his wins and losses against Joe.

It is possible that Kira might had been manipulated and used by evil forces in Duel Masters 2017, as shown with his hostility against Joe during and after the duel in the episode with his mother berating him after the duel (And is later seen manipulating him in a way similar to the Master with Hakuoh in Shobu's first adventure).

Due to his twisted sense of justice, he was merciless towards enemy creature spirits, even killing them in stark opposition of the Kirifuda Family's belief that all life was precious and meaningful no matter the circumstances.[1] However, he do have some conscious and regrets on his actions, as he felt guilt over his actions and that Joe will disapprove his actions if he knows the truth.

As the series progress further, his personality continues to darken, similar to Hakuoh in Shobu's era on his first adventure and possibility that the past generation duelists will disapprove his actions or interfere as this might lead to the same tragedy in the past to reoccur.

Even though he changed for the better, he paid a heavy and bitter price for his previous actions in the form of the Darkness Civilization's 卍 De Szark 卍. At this time of defeat, he felt true fear and loss.

Kira first met Joe when Joe was 7 years old under a cherry blossom tree. He was quite impressed by Joe's artistic talents, and has defeated joe endless times until one time where Joe was defeated by Basara and the 2 fought. Despite him swarming the field with Mono-Light rush and guarding himself with Phantasm, Moon's Radiance, Joe managed to win using Jolly the Johnny Joe.

He was in a plane when the meteor shower appears.

He was transferred to the school Joe attends. Joe encounters Kira again when he was trying to see what was going on within the crowd. Kira then hangs out with Joe in Lulu Takigawa's bar, exploring the shopping district and having ramen in Joe's favourite ramen stand.

However, when they had dueled, He had completely locked down Joe's field using Shouten, Stellar Guidance and Wonder Turtle, Great Labyrinth Turtle and became extremely hostile, and despite Joe sending out Jolly the Johnny, he used Shouten's ability to redirect the attack to Wonder turtle and crushed Joe. When Joe asked him for more answers he left. When he went back home, his mother, which is shown as a silhouette, berated him.

He also warned Joe about Boltz later on and followed him (Boltz) when he escaped to a portal. Back in his home, he enters the crystal room and threw a diamond into the gate. He receives a blank card and his mother reveals that it won't be complete until Kira have his true determination. In order to complete the pact with the master card, Kira has to defeat a person without doing anything other than charging mana during his turn.

Later on after defeating Joe again, he encounters Boltz in a fiery area and challenges him to a real duel similar to the Shizenseijin encounter that Joe had. Boltz managed to break all of his shields only to have Kira cast Novalty Amaze as a last shield, then the blank card materialized in front of him and reveals it to be the black king of light, Ov Sidia. Kira sends it out using the Super Shield Trigger bonus and it sends out 4 other Metallicas as Boltz has 4 creatures. Then he goes for the one shot, giving him 9 shields due to Ov Sidia's Master Labyrinth and defeats Boltz before meeting Joe again in the sunset, with Joe seeing something wrong with him.

He later went to the Ramen Festival with Joe and participated in a battle royale that involved him, Joe, Team Usagi and Shacho's Gang and was defeated by Pyonko-Hime.

One day he and Joe saw a Duel Warrior Jababa Hat that sells hats that mind control others, including Uraraka Momo and Shacho's gang. After he distracted Joe with a hat, he went to the house directly and saw him as a scammer enjoying all sorts of luxuries in a mansion-like setting. Then he challenges him to a duel. While Jababa Hat's infinite attack caused the destruction of all his creatures, he used DG ~The Thing Made By Man~ to spam 4 copies of itself and at the next turn despite Jababa Hat's Babylon Gelg, he went for all the shields and won. After he won he killed the Jababa Hat out of "Justice" and left Joe while with-holding that he killed the Duel Warrior.

He also pursues Boltz just to kill him in a true duel, and Boltz had been completely prepared for that. During the duel, he survived Boltz's Bad Brand rush and used DG ~The Thing Made By Man~ to send out Ov Sidia. While Boltz got around Ov Sidia by casting Final Bad Bomber to kill all of Kira's metallicas, Ov Sidia suddenly transforms into Ov Sidia DG and Kira casts a One Eye's Judgment Judgment Emblem and stopped Boltz's resistance quickly. However, as Kira saw Boltz is Joe's friend, he did not kill him. Due to Boltz warning Joe, Joe is finally somewhat aware of his strange activities.

As the stability of the Civilization barriers within the creature world shakes due to Gap and Ze-ro, Kira evacuates the Light Civilization inhabitants to safe ground while Galaxy Savarktis creates a barrier.

Kira is now a regular on Joe's party. He transferred to Joe's school just like Cap and Bolts. He was also a frequent stalking target of the mysterious girl Emma Kobayashi.

In Episode 3, he was defeated by Abaku Onifuda, who gave him back one point, not willing to see him eliminated yet. As a result, he received training and obtained his King Master Card: I Am Justice If You Want.

Kira is incredibly weary around Zero Jr. instinctively, despite the son of his archnemesis doesn't seem to bear any ill intent unlike his father.

In Episode 22, Kouki, an elite agent of Abaku made friends with him. However, the friendship was broken when Emma confessed with Kira in the stadium, despite she confessed to him way before, and Kouki was impaled by a mysterious spear. Revealing his true colors as a shell-shocked war veteran seeking for revenge, Kouki defeats Kira easily and broke the pendant Kira gave back to him.

Joe Kirifuda encountered him enjoying an ice cream cone when travelling with Bainaradoor. However, when Joe tried to exit the Bainaradoor, his hand mistakenly swiped Kira's hand and caused the ice cream to go off the ground, enraging him with Joe not knowing why. (And only noticing after he beat General Rabbit in Pyonko-Hime's hot air balloon).

He is also noticeably more ruthless in the manga, physically killing Duel Warriors since he sees them as balance usurpers and "Evil".

He uses a Light Civilization deck.

He uses a Light Civilization deck based on Metallica. It later used Judgment Emblems and Sabakists. 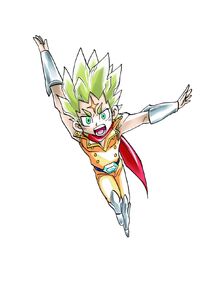 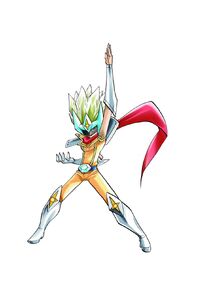