Originally, only three creatures had this race, each of them Psychic Super Creatures;

All of those 3 creatures are Victory creatures as well as being three-part Psychic Super Creatures that have a Red Command Dragon as one of their psychic cells.

Later, King Command Dragons appeared with all Civilizations and the Unknown Race, even with Zero Civilization creatures.

Creatures in Episode 2 have names that are based on Piano Music composers.

They are a race who were spawned from the Zenith and are the "King of the Dragons" who attempted to rule all other Dragons. They were commanded by Beethoven, Zenith of "Horror". Eventually, Beethoven gets awakened to the power of "Truename" and released their domination of other dragons.

In Episode 3, the last surviving unknown, Gospel, Oracle King is a King Command Dragon. They were later confirmed to survive in the duel masters world according to the presence of Codeking Khachaturian.

All King Command Dragons under the influence of the power of "Codename" are clad with armor. The Dragon inside the armor can control the armor's toughness. Once they awaken to the power of "Truename", they shed parts of their armor.

They tend to have extremely high costs (A lot of them have a cost of 9), extremely high power and an extremely potent effect, intended to be spammed by Creatures such as Balga Raizou, the Super-Heavenly Nova. 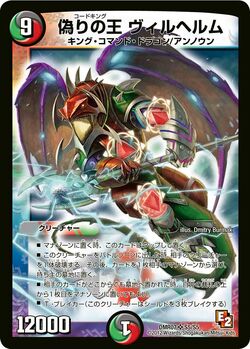