Justice Wing is a race of creature in the Light Civilization.

They each feature の (no Tsubasa, Wings) as a suffix.

They mostly consist of human-like creatures who have their eyes obscured by eye masks. Following the name of their race, they are winged warriors who use orbs as a symbol of Justice. The orbs seem to increase once Justice comes to play. 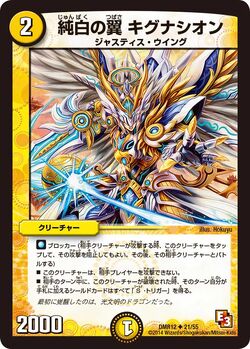 Retrieved from "https://duelmasters.fandom.com/wiki/Justice_Wing?oldid=446581"
Community content is available under CC-BY-SA unless otherwise noted.