Jurassic Dragon is a race of Dragon creature in the Light and Nature civilizations.

They have [NUMBER]族 in their names which reads as a Swahili number [1] based on [NUMBER].

They are a lesser race of Jurassic Command Dragon to prevent them to be abused with the Invasion ability as well as being unable to remove seals.

They are paired with the Revolutionary team race, Team Damama.

Jurassic Dragons are affected by all cards that affect Dragons, but currently there are no cards or evolution creatures that specify Jurassic Dragons 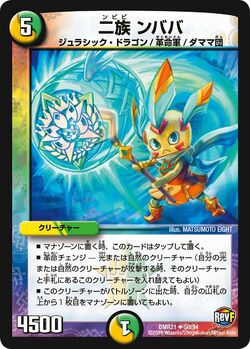 Retrieved from "https://duelmasters.fandom.com/wiki/Jurassic_Dragon?oldid=418121"
Community content is available under CC-BY-SA unless otherwise noted.