They feature 類 (Rui) meaning "~kind" or 目 (Me) meaning "Eyes" as a suffix. This is also sometimes combined.

While named after the Jurassic period, dinosaurs from the Cretaceous have appeared. Other creatures such as Mammoths or eggs have also appeared. Some cards are also named after poison, or singing idols.

The Jurassic command dragons were born from the earth by the Beast Folk Go. Their appearance are usually based on dinosaurs, but some of them are based on non-dinosaur ancient creatures such as mammoths.

It is said that they had been revived since ancient times, but no dinosaur-like creature had been seen in Duel Masters before. Sasoris, Dragon Edge used Judaina, Jurassic Hammer to revive the Jurassic Command Dragons. The type of Dragons they were was determined by the number of acorns they accepted from Sasoris. This suggests that Sasoris might have a connection with the Wild Veggies.

In Revolution Final, they are mixed with light and appear mixed with other animals. Those related to Team Damama resemble lions. 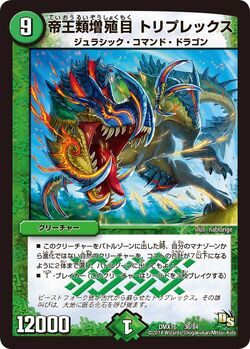 Retrieved from "https://duelmasters.fandom.com/wiki/Jurassic_Command_Dragon?oldid=419570"
Community content is available under CC-BY-SA unless otherwise noted.