It only exists exclusively as a subtype on spells.

When a spell with this subtype is cast from your hand, you are able to put this spell face up onto one of your shields.

If you don't have a shield, the card is put into your graveyard. This is also true if you cast it from your graveyard or mana zone.

The outer border of the card frame is decorated with a crystal pattern, as well as the card illustration forming an "Emblem". As the cards are presented in a Full Frame art, when placed on a shield, it appears as if the "Emblem" is on the shield itself. 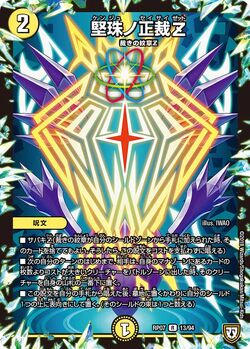 Retrieved from "https://duelmasters.fandom.com/wiki/Judgment_Emblem_Z?oldid=385067"
Community content is available under CC-BY-SA unless otherwise noted.