Jokers One Turn Kill is a colorless One Shot Kill deck.

The deck is similar to a standard Jokers deck, but it instead uses Jhot Gun Joragon, Gayoushin and Iron Manhattan to finish the opponent instantly in one turn.

The player first swarms the board with Jokers, then returns the useless ones, namely those with only Come Into Play effects to the hand to summon Jhot Gun Joragon with only 1 mana. Then, the player attacks with Joeragon and discards Gayoushin to get more combo parts, then discards Iron Manhattan to break all of the opponent's shields, and finally ending the chain with Jobato De Runo or Baron Gelacho to untap Joragon to break the remaining shields. Another discarded untapper can result in a direct attack from Joragon if the opponent has no shield triggers. Also, Iron Manhattan to some degree can prevent the opponent from spamming creatures for comeback on next turn, provided there isn't already a shield trigger creature like Ragnarok, the Clock and the player has no shields.

Additionally, if the opponent has extremely troublesome defensive setups such as a combination of Ninja Strike Shinobis and Cyberdice Vegas, Gambling Expert of D or a massive wall of blockers, the player can break the defense using Codename iFormulaX. In order to do this, take the following procedures:

The deck later transformed into forgoing the aforementioned strategies and instead use King the Slotton 7 / Seventh Seven to cost trample Jokers to attack the opponent directly after Iron Manhattan. Due to the increase of Fire Jokers in the deck, Niyare Get, Zero Trick was forgone as well. 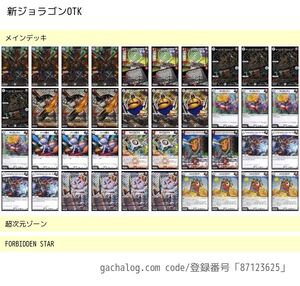 An example of a Jokers One-Turn Kill deck.
Add a photo to this gallery
Retrieved from "https://duelmasters.fandom.com/wiki/Jokers_One_Turn_Kill?oldid=388767"
Community content is available under CC-BY-SA unless otherwise noted.