Jokers is a race of creature that were primarily release in the Jokers Civilization.

They were later featured in each of the 5 monocolored civilizations.

At the time of their release, most creatures with the Jokers race were colorless.

However, there were cards later released in the Water, Fire or Nature civilizations that feature exclusive keywords. These are themed after Joe's allies and are based on other keywords.

During the The Rise of Kings block, Jokers appeared in the Light

civilization (DMRP-18 Miracle Forbidden) and in the Darkness

They have an associated Master Breaker or Master Double Breaker keyword on some of their finisher creatures that allows them to destroy creatures before a shield is broken. They also have an unnamed ability known as "Reverse Fury Charge".

Some of them feature an ability that allows them to attack your opponent on the turn they are put into the battle zone, as a weaker form of Speed Attacker (they can't attack creatures).

Similar to Outrage, they have a variety of low-to-high cost cards, with effects from the 5 civilizations being shared among them.

Any card that refers to "Jokers" refers to the race, not the civilization. The civilization is still considered to be colorless. Also if they refer to 2 zones, it is a number based combination of the 2 zones.

As Joker colorless creatures that cost 2 mana exist, it makes spells such as Niyare Get, Zero Trick able to be cast on turn 2, and very weak colorless creatures such as The Ramen can be used to break all the opponent's shields in turn 3 using Nothing Zero, Secret Destruction.

In the Ten Kings, they were associated with the Fire and Nature race of Team Kirifuda

Other Jokers races include;

They are themed after the drawn creations of the new anime protagonist, Joe Kirifuda. Unlike previous protagonist races, they are not Dragon creatures.

They are a mysterious race that suddenly appeared in the world for an unknown reason or objective. They are extremely comical in appearance and do not follow traditional naming conventions. However, many do resemble objects with human bodies or living objects, in a way similar to Tsukumogami.

The illustrations of Jokers cards seem to display real-life locations instead of locations in the creature world, indicating that they might have come from the human world.

While being Colorless, they seem to be unrelated to Zeniths, Oracles and Oraclions and have completely different personalities, being warm and friendly towards humans as opposed to the cold and destructive personalities of the previous 3 races, as well as differing in combat strategies, with a focus on weenies instead of larger creatures.

Jokers spells with Super Shield Trigger also often have artworks that resemble creatures instead of spells, and in the anime, they function in the same way as Creature Spirits.

They are creatures that are created when Joe Kirifuda inserts drawings into Deckie and sticks a key into his rear. They can also be used in daily tasks, such as Chotto Q acting as Joe's main transport. However, some request Joe to pay for their services for reasons unknown and unexplained. 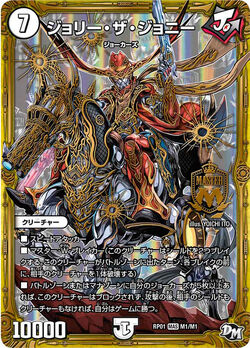