Johnny is a Name Category of creatures that primarily have a Jokers race.

It was introduced as a Name Category with the support card of Jogirasta Gunlance.

While Johnny Walker, Exploding Mask was the first creature released that has "Johnny" in its name as is supported by the Name Category, it doesn't fit the usual Jokers theming of Johnny creatures used by Joe Kirifuda. 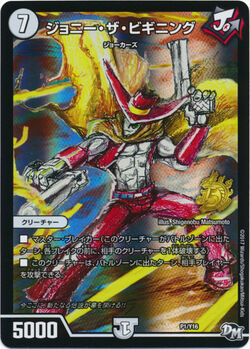