Invader ZERO is a race of creature in the Darkness Civilization.

Each creature in the race includes in its card name.

As they each feature the ZERO ability, their gameplay relies heavily on the opponent using For No Cost abilities such as Revolution Change, Invasion and their variants, as well as spells such as Heaven's Gate or Hogan Blaster during their own turn.

They are a type of Redzone who absorbed all of Dokindam X, The Legendary Forbidden's remaining powers and are created in order to awaken Dormageddon X, Forbidden Armageddon.

Invader ZERO are affected by all cards that affect Invaders, but currently there are no cards or evolution creatures that specify Invader ZERO. 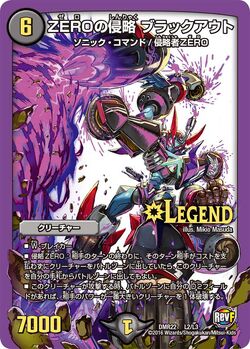 Retrieved from "https://duelmasters.fandom.com/wiki/Invader_ZERO?oldid=404072"
Community content is available under CC-BY-SA unless otherwise noted.