Invader is a race of creature shared between the 5 monocolored civilizations.

Instead of the usual civilization symbol, Invaders have an eagle with a globe on the eagle's back as a watermark behind their effect text. It is the same symbol that Duel Masters Land uses in the anime series.

The major invaders are of the Water, Fire and Nature civilization alignments, but later Light invaders had gained a role too.

Invader ZERO was also released in DMR-22 The World of Zero!! Blackout!! on the side of Dormageddon.

Other factions of Invaders in the various civilizations have specific nomenclature themes and paired races, as well as being used by a character in the Duel Masters Versus Revolution anime series.

Their evolution creatures mostly have the Invasion ability word.

They also sometimes have an ability that activates when the opponent has 2 or less shields.

Other Invader races include;

Creatures that evolve from Invaders: 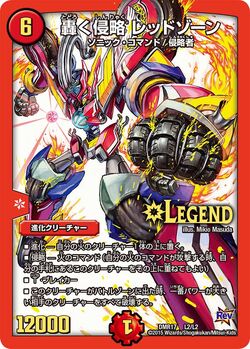