Initials is a race of creature shared between each of the 5 monocolored civilizations.

Creatures with this race are labelled with different Initials based on their race and civilizations.

They are creatures that are created to serve Dokindam X.

At the end of Revolution Final, only the initials of M, W, and Initials X creatures remained and they were all defeated by the 4 Revolutionary teams. After the destruction of Dormageddon X, Forbidden Armageddon, they were never heard from again.

The race was mainly used by the Rare Killers, a dark organization who plans to take all rare cards as sacrifices for Dokindam X.

Some of the Darkness / Fire Initials that follow Dokindam X feature his spears in the text box instead of the usual civilization symbol.

In Revolution, they have effects that support Dokindam and are predominantly exclusive to the Fire Civilization.

In Revolution Final, they had spread to all civilizations and unlike the Invader rush strategies such as Redzone, they also played a more control stance that relied on the use of D2 Fields to control the battle zone and wipe out the opponent's creatures, which gives them a balance between offense and defense. Many of them featured various strategies based on the Master Initials they follow in the background story.

Other Initials races include; 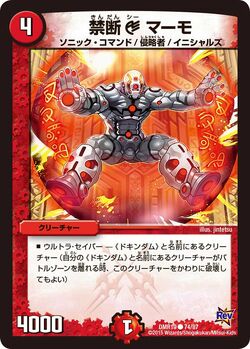 Retrieved from "https://duelmasters.fandom.com/wiki/Initials?oldid=419724"
Community content is available under CC-BY-SA unless otherwise noted.