Human Baku is a race of creature in the Fire Civilization.

Human Baku creatures are named after brands of Whisky or distilleries.

They are Humans who wear armor and wield weapons that mimic Dragons.

They wear less armor then the original Human creatures and seems to rarely use firearms as weapons.

The "Baku" in their name could be a reference to Onimaru "Explosion", Golden Age, but their relationship with said creature is unknown.

In Revolution they act as Invaders who follow the Sonic Commands. They tend to have high-tech equipment that do not appear in their usual counterparts. 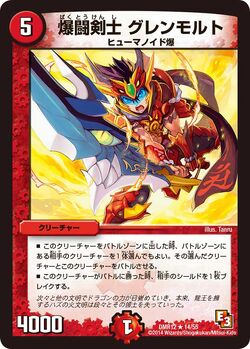 Retrieved from "https://duelmasters.fandom.com/wiki/Human_Baku?oldid=390895"
Community content is available under CC-BY-SA unless otherwise noted.