Human is a race of creature in the Fire Civilization.

Humans are a proud race of the Fire civilization. They enjoy flashy displays of might, respect chivalrous conduct, and value individual honor. Humans are engaged in various occupations, including Armored Warriors (soldiers who weaponize themselves in times of war), Treasure Hunters (those who excavate usable weapons in the pre-Ancient War ruins), and Commanders (those who practice the traditional art of directing the Armorloids that were created by Humans before the Ancient War).

Upon reaching adulthood, Humans are outfitted in full armor. From that time on, it is considered a dishonorable act to remove one's armored mask in public.

Despite the fact that they are inferior in number and territory, Humans are the Dragonoid’s greatest enemy. In the event of war, they are able, like Dragonoids, to become living weapons, arming themselves with fire, iron, and gunpowder.

All Humans are male before the Episode 2 block. In Episode 2, female Humans are introduced due to the change of the style of the game's character designs.

Other Human races include;

Creatures that evolve from Humans 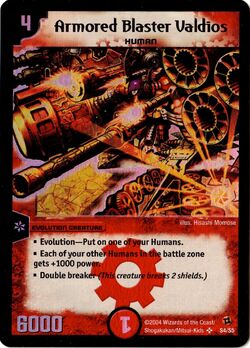