Hero is a race of creature shared between all 5 civilizations.

While initially exclusive to multicolored creatures, a monocolored Light civilization card was later released in DMX-12.

They are first based on the two hosts of DASH TV and the protagonists of the Duel Hero: DASH series of the Duel Masters manga, but later spread to other real-life personalities and collaboration characters after the two retired.

There are 5 cards with this race as well as Human

Jace, the Mind Sculptor was later introduced paired with the Planeswalker race.

Dueman is the only Hero creature without another race.

Other Hero races include; 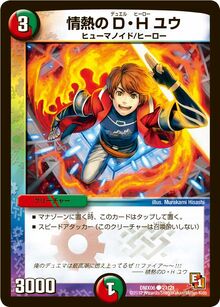 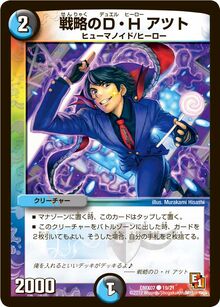 Retrieved from "https://duelmasters.fandom.com/wiki/Hero?oldid=419710"
Community content is available under CC-BY-SA unless otherwise noted.