Guerrilla Division is a Name Category shared between the 5 civilizations.

Each of the Guerrilla Division creatures have no limit to the number of them you may have in your deck, in comparison to a card that is regulated to 4 copies in a deck (if that card isn't on the Hall of Fame).

They also feature an ability that give them +5000 power and "double breaker" if you have 5 or more creatures that have "Guerilla Division" in their name in the battle zone.

This category of creatures were based on Chorochu, Forty Body, a fire card with no deck amount limitation. However, these cards are featured in each of the different monocolored civilizations and only feature an ability with more than 5 creatures in the battle zone, compared to Cholochu who gets a weaker but a power increasing per copy of itself. 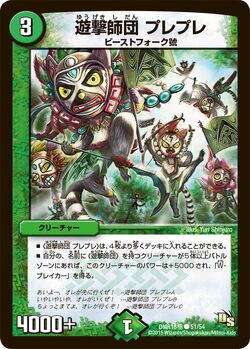 Retrieved from "https://duelmasters.fandom.com/wiki/Guerrilla_Division?oldid=404221"
Community content is available under CC-BY-SA unless otherwise noted.