Guerrilla Command is a race of creature in the Darkness Civilization and Nature Civilization.

They appear as bipedal beast-men wielding weapons with technology levels that exceed the standards of the Nature Civilization, such as bazookas and rocket launchers.

Non-evolution creatures have names that are wordplay on animal names.

Medium ranking creatures have (Beast Army) as a suffix.

Evolution creatures have (Super Beast Army) as a suffix and their names consist of two words fused into one word. 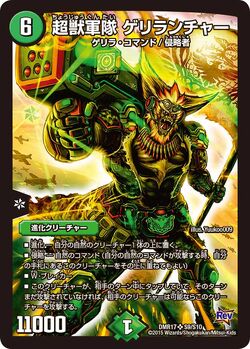