Growth Miradante is mainly Light Nature, but some variants include a touch of Water.

This deck saw modest use in the Revolution Final metagame, but garnered wide recognition after placing 4th in the 6th Certified Grand Prix on April 21st, 2018. The Twinpact Series introduced creatures with Mach Fighter like Tsukutcho and Wa Tanpopo Tank, and Twinpacts like Mixel, Strange Stone / Jamming Chaff. These creatures made the deck faster and more reliable than ever before.

Miradante Twelve, Time Pope
Add a photo to this gallery

When putting Miradante Twelve, Time Pope into the battle zone, the player in most situations should either have Mixel, Strange Stone / Jamming Chaff or Final Stop in their hand. Casting this spell locks the opponent down almost completely.

Use Mixel, Strange Stone / Jamming Chaff and Deathmatch Beetle to counter the opponent's for no cost strategies.

As this deck relies almost entirely on Revolution Change, anti-for no cost creatures must be removed for this deck to work properly. Senno, Brainwash, Onikamas, Strange Flow, Magnum Lupia / Crimson Charger, Mixel, Strange Stone / Jamming Chaff, Matador Marcuze, Entertainer of Stealing and Lying, Magnum, Allshot Puppet, Magnum, Fast Attack Puppet and Oriotis, Control Wings are all low-cost creatures that must be dealt with. Tsukutcho and Wa Tanpopo Tank can take care of most of these. For the most powerful ones like Senno, Brainwash and Entertainer of Stealing and Lying, Akashishima / Red Agraf should be employed.

As this deck aims to ideally defeat the opponent at turn 4 or 5, few defensive Shield Triggers are used in this deck. Most, if not all, are spells. Thus, this deck is vulnerable to one-shots and spell locks. 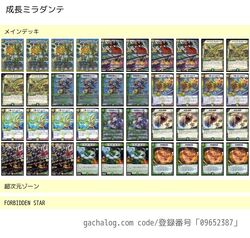 Template Growth Dante with Mach Fighters, as of March 2019. 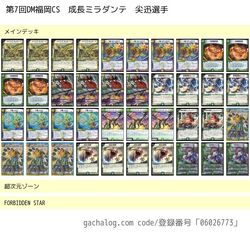 Template Growth Dante a larger focus on anti-meta, as of March 2019.
Add a photo to this gallery
Retrieved from "https://duelmasters.fandom.com/wiki/Growth_Miradante?oldid=347602"
Community content is available under CC-BY-SA unless otherwise noted.