Great Mecha King is a race of creature shared between the Light and Water civilizations.

They are based on mechanical and robotic beings, with transportation themes such as trains and firefighters.

Some Great Mecha Kings have effects that go work together with Machine Hero.

They are often paired with the Dynamo race and keyword, as well as being paired with other Light, Nature and Darkness races such as Arc Seraphim or Grand Devil.

The Great Mecha Kings were the first hybrid race to start their conquest onto other hybrid races in order to get the resources to defeat the Phoenixes. At first they tried to invade the Dreammates, but the Dreammates were too powerful for them despite their seemingly harmless appearances so they decided to invade the Tyranno Drakes instead and defeated them. They were later defeated by a Grand Devil and Tyranno Drake alliance.

In Episode 2, they were one of the races that were conquered by the Unknown.

In Revolution, they appear as Invaders along with Magic Commands. Unlike previous blocks, Great Mecha Kings in Revolution are only consisted of the Water Civilization, a situation shared by Dreammates in Episode 2 which were all consisted of the Nature civilization. They are based on Gachapon machines and later on, they are often paired with Magic Commands. 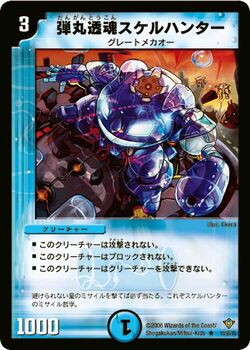