It is centered around cards that are able to Self Mill, Self Discard as well as abilities that trigger when they are put into your graveyard from anywhere.

The deck is focused on using those cards in order to Graveyard Feed yourself to put Crossfire, Millionaire and 5000GT, Riot into the battle zone quicker as finishers.

With the restriction of Moors, the Dirty Digger Puppet and Kubrick, Spiral Accelerator, it has been somewhat weakened.

However, in DM2017, it has regained a few reinforcements that increases its speed and power, including Iwashin, One Man Army, which allows it to mill itself in and Bombardment Mutant which allows it to remove low-power creatures (previously including threats such as Jack, Bei B).

It can also use Rafululu, Sound Faerie to lock the opponent's spells, allowing it access to the Magnalulu Combo. Recently, it sometimes uses Deal, Mechanic / 「Today's Lucky Number!」 to lock down the opponent and remove his creatures as well.

Despite Platina Walsura S getting restricted, the deck is getting new reinforcements, thereby ensuring its meta status remains the same. The introduction of a highly effective graving, recovery and removal card in the name of Obuza 08, Demon Dragon Armored / Beginning of the End and the offensive powers of Gogogo Brand has also enticed it to forgo water and instead use only Fire and Darkness. 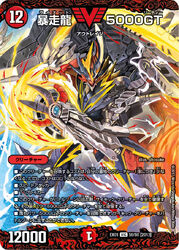 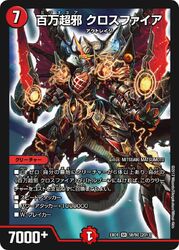 Crossfire, Millionaire
Add a photo to this gallery

Graveyard source easily satisfies the conditions of its Zeron Nebula, and also can use The Lost, Dark Armor to help with Ceremony of Resurrection.

(This deck was last updated Febuary 2020.)
Retrieved from "https://duelmasters.fandom.com/wiki/Graveyard_source?oldid=385489"
Community content is available under CC-BY-SA unless otherwise noted.