Grand Devil is a race of creature shared between the Water and Darkness civilizations.

Grand Devil creatures and multicolored or multi-race creatures have (Fūma) meaning Fuuma (or Sealed Devil) in their names.

Evolution creatures have (Makō) meaning "Lord of Devils" as a suffix.

Evolution Creatures usually have a goddess statue as a part of their body.

Many Grand Devils work in unison with Deep Marines, as well as sharing the civilizations.

They are the descendants of Demon Commands and have the ability to absorb other creatures into their bodies. As a result, their appearance varies between individuals, from resembling Wasps, resembling Birds and creatures that are purely wicked in design.

In the background story, they worked in conjunction with the Tyranno Drakes and used Hell Hand to forcibly revive the Dragons. They are responsible for the creation of Death Arcadia, Devil Saint, the Poseidia Dragons, and the Apollonia Dragons which never existed in the ancient world. Some also fused with the dragons they revived as well.

In the events of Episode 3, they attempted to absorb the God Novas in order to get their power but were converted along with other races.

Although some take a female form, it is unknown if those Grand Devils are actually female as they simply possess other creatures.

It is implied that while they may not be as strong as Demon Commands, they are certainly some of the most evil and wicked creatures in the Duel Masters world.

Creatures that evolve from Grand Devils 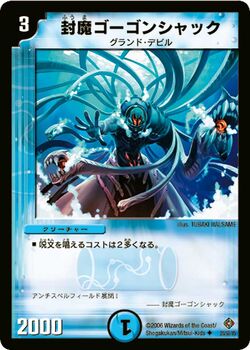