It is based on the spell Salvage ability of Giovanni the 10th, Thunder Mecha King's to stall the opponent early for a deck-out.

While it wasn't a metagame deck type in the past, it has gained good reinforcements in Revolution Final and is able to stop Revolution Change and Invasion rushes completely as those decks don't usually run Mana Acceleration.

With its early lockdown capabilities, it has became one of the most overwhelmingly difficult to deal with lockdowns in Duel Masters history. Due to the difficulty of facing off against it, Giovanni the 10th, Thunder Mecha King has been directly banned to 0 copies and the deck type was made defunct.

It can be used in Hall of Fame Zero Duel and is among one of the most dangerous decks there along with Kikuchi Patrol and Soulswap Loops, but is easily locked down by Orlilia, Flash of Justice if Mega Magma Dragon is not used. Thankfully, this is now easily migtated by Diceclops.

Drill Squall
Add a photo to this gallery 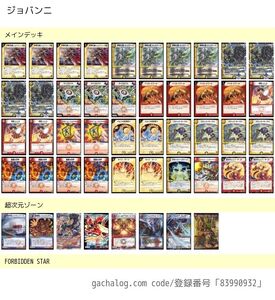 A Giovanni Squall commonly used outside of the Hall of Fame regulations.
Add a photo to this gallery
Retrieved from "https://duelmasters.fandom.com/wiki/Giovanni_Squall?oldid=387695"
Community content is available under CC-BY-SA unless otherwise noted.