Giant is a race of creature in the Nature Civilization.

Giant creatures feature 超人 (Chōjin) as Kanji meaning "Superman" in their card names, with ジャイアント (Jaianto) written above it in katakana meaning "Giant".

Evolution creatures have 大宇宙 (Daiuchū) meaning "the Great Expanse" in their names.

Giants in the Episode 2 block are named after food.

With three eyes, enormous muscles, horns on their shoulders, and a humanlike posture, they have evolved into powerful creatures that flourish in the harsh environment. Their tough skin, like a suit of armor, protects during enemy attacks. Immense upper and lower body strength allows them to withstand the dense gravity. For the most part, Giants are simple-minded and gentle. However, when disturbed, all three eyes will open wide, and Giants can become ferocious and brutal.

The Giants first appeared in DM-03 where they rose up to protect the Fiona Woods when the Darkness forces had went near the innermost part of the forest.

While they are extinct in the Phoenix Saga, Stratosphere Giant is known to exist at that time due to a lack of enemies. It might had been died of old age in the God Apex Saga.

In the Sengoku Saga, most Giants are also Samurais. However, some are Knights or Shinobi.

In Episode 2, the Giants were converted by the Unknowns and their design are usually related to eating food. They later awoke to the power of emotions and fought with the Golden Age resistance force.

Most Giants released early in the game often have certain drawbacks in order to complement their high power and low cost, such as Nocturnal Giant's inability to attack creatures or Headlong Giant's requirement to discard a card while attacking. This tradition has ended with Bodacious Giant in DM-10. However, as the game's Power Creep started, appropriately costed Giant creatures had started to appear.

There were no Giants printed in the Reincarnation Saga as well as the Phoenix Saga, with the latter being where most old races became extinct until the Gods revived them.

Other Giant races include;

Creatures that evolve from Giants 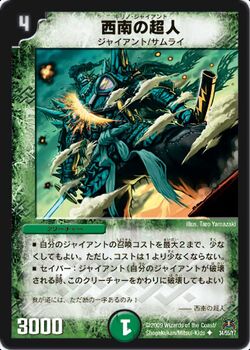