Ghost is a race of creature in the Darkness Civilization.

In the TCG, mono-darkness civilizations creatures with the Ghost race are named "_____, Shadow of _____".

In the OCG, they have の (no Kage) meaning "Shadow of" in their name.

Ghosts in the TCG are named after various afflictions such as Greed, Anguish or Despair.

Ghosts exist as spirits in the Darkness civilization. Long ago they attempted unsuccessfully to gain eternal life by abandoning their bodies. Instead they appear as a translucent fog, forming a blurry, three-dimensional image. Individual ghosts resemble their original form before death.

Ghosts belong to Dark Lords; their lives cannot be sustained without power from the Dark Lord. Driven by uncontrollable jealousy and an obsession to destroy those who possess flesh, they are able to enter the psyche of their enemies to terrorize and drive them insane.

They are mostly consisted of small, light creatures, usually with 5000 power or less, although creatures with over 6000 power of this race do exist. However, they usually have an effect that can disrupt the opponent, such as Discarding, Slayer, and Decreasing Power.

One of the more unique creatures of the race includes Time Tripper, Shadow of Stagnation, who disrupts the opponent by slowing down his mana production.

Creatures that evolve from Ghosts 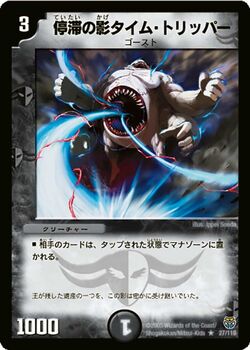 Retrieved from "https://duelmasters.fandom.com/wiki/Ghost?oldid=419487"
Community content is available under CC-BY-SA unless otherwise noted.