George Kamamoto (also known as Boy George) is a character who first appeared in the Sacred Lands season of the Duel Masters Anime.

His pajama outfit changes appearance in each season of the anime.

George is an older duelist who is short and wears a pink bear suit as well as a pacifier. He rides around in a motor baby carriage.

He is a skillful duelist and has even defeated Mimi fairly easily on his first appearance.

After to losing to Yumama in Duel Masters Charge he also withdraws from the tournament.

He used a Water Civilization deck based on the Liquid People race.

In the Sacred Lands season, his deck was filled with Water Civilization cards. He used the same deck from Season 1. He added the next new cards:

In Duel Masters Charge, he used a Water and Darkness deck.

In Zero Duel Masters: Episode Listing he changes to a Water and Darkness civilization deck.

During Duel Masters Cross he started to use a Fire and Nature civilization deck.

At the beginning of the season he used a Nature Civilization deck based around the Dreammate and Vehicle Bee races.

Later during the season he also added cards of the "Kankuro" line of psychic creatures.

He was defeated against Shobu using these cards.

Appearance from Season 1 and Sacred Lands 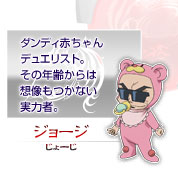 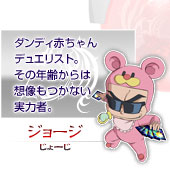 Appearance from Duel Masters: Birth of the Super Dragon
Add a photo to this gallery

Retrieved from "https://duelmasters.fandom.com/wiki/George_Kamamoto?oldid=352949"
Community content is available under CC-BY-SA unless otherwise noted.