Gekko Kingdom is a race of creature in the Light and Darkness civilizations.

This race has an associated keyword, Oshiokimoon.

It also appears as a subtype on spells and is used by Kouki.

The Kingdom's residents are largely consisted of the Devil Mask for low-cost creatures, while high-cost creatures often both have the Angel Command and Demon Command races.

Creatures with this race include poetic sentences in their flavor text.

Cards with the Oshiokimoon keyword have (Tsuki, Moon) in their names.

Usual creatures are named in a "poetic" fashion.

There are currently no cards or evolution creatures that specify Gekko Kingdom. 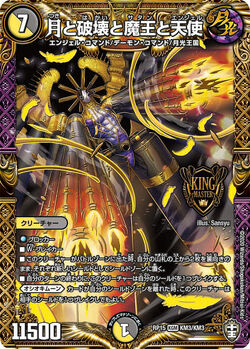