Gaial is a Name Category of creatures in the Fire Civilization that first appeared in DMR-01 First Contact.

As a card used by Katta Kirifuda in the Duel Masters Victory and later anime series, this category of cards has had multiple variations across the creature types.

While primarily featuring the Red Command Dragon and Hunter races, they later turned into Outrage MAX; Gaial, King of Kaiser, and like other fire dragons in the Dragon Saga became Gaial Command Dragons; one of them being Gaial Mobius, Victory Emperor.

It is quite prominent as a category for being part of 5 different Psychic Super Creatures.

Cards supported by creatures with "Gaial" in their name 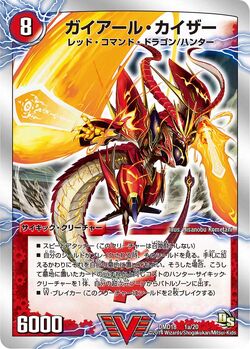