It is an action-figure which have a roulette counter in it. In order to use it, hit the counter in the head and a random number and phrase will appear. There are two types of Gacha figures; Dogiragon Gacha and Dokindam Gacha.

A 6-sided dice can be used in place for the figures if one wishes: However, the rulings for this are unknown.

However be noted that Gacha Figures cannot be used in official tournaments save for Duel Festivals, so cards that are reliant on Gachas are useless in them.

It affects the following cards

It affects the following cards 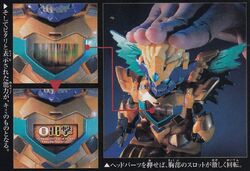