Forbidden Characters is a form of card text featured on cards in the Duel Masters Trading Card Game. 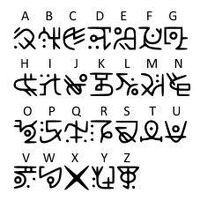 Forbidden characters are a type of encoding system that is first featured on a promotional version of Forbidden. It encodes English and thus the forbidden Characters correspond to English characters. At first the text is considered to have an unknown meaning, but players managed to decipher the text, revealing the mysterious Seal mechanic. This mechanic was an unknown mechanic and thus many players thought it is a non-card object.

Later on in the Duel Masters Versus Revolution Final: Episode Listing season of the anime, a card named kndn legend dkdm x appeared and is used by Basara, revealing the Seal mechanic. The card itself is actually a secret version of Dokindam X, The Legendary Forbidden which appears extremely rarely and is nearly impossible to obtain by regular players due to its extremely low packaging rate and thus high prices.

It also introduced Initials X creatures that had Forbidden Characters for Greek letters.

Examples of cards with Forbidden Characters

Red-End, Super Lightning Sonic was also seen played by Basara. Its name and race was in Japanese characters, but the ability and other card details were in forbidden characters.

Additionally, forbidden characters have been featured in creature's artworks, reading as follows:

Since each of the cards with a Forbidden Characters card exist with a Japanese printing, they can be directly compared to the original card.

The DMSP-02 Booklet includes Forbidden Characters associated with each of the cards released in DMSP-02, typically foreshadowing which creature each of them would be fused with to form a Dispector.

Appearances in the anime

Only Basara is able of reading the forbidden characters, this being the reason why Zakira let him have the unsealed version of Forbidden. Later on, when Basara duels against Lucifer in a revenge match, the card of Red-End, Super Lightning Sonic had its effect changed from kanji to Forbidden Characters which only he could read, which influenced the outcome of the duel as Lucifer accidentally destroyed it and helped his opponent unseal Dokindam X after playing a Fire Command.

The letters surrounding Red-End, spell out his name, REDEND redend

The letters showed during Dokindam's liberating and those shown on cards that seal the opponent's creatures read, SEAL seal

The letters on Redzone X's bracelets spell out DARKNESS darkness