Flame Commands is a race of Command creature in the Fire Civilization.

Many of its creatures feature Double Cross (XX) in their name. Most of them also feature Armored Dragon as an additional race. 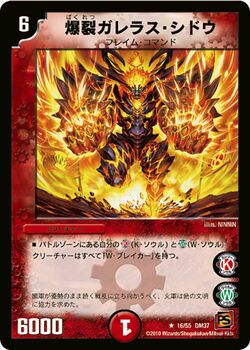 Retrieved from "https://duelmasters.fandom.com/wiki/Flame_Command?oldid=371436"
Community content is available under CC-BY-SA unless otherwise noted.