While Fire Jokers were never popular due to the lack of reversal resistance, colorless support or speed for regular Jokers decktypes, the appearance of Dondodo Doramusko and Jojojo Maximum allows it to operate with high stability.

It focuses on sending out Yattareman in turn 2, Dondodo Doramusko to search out key parts and give Merabeat the Johnny Jokers Over Explode, allowing it to be summoned as early as in turn 4 to call out Omegattai Sandaioh and cast Jojojo Maximum to send all of the opponent's shields to grave.

Due to the deck reliant on cards in hand, it is weak to discard, although Runezance can be used to migtate the risk. However, discard is not common in the 2 Block Constructed format, so if the build is built with that format in mind, anti-discard is not needed.

Cards commonly seen in colorless Jokers decks can be incorporated to this deck for increased flexibility.

(The cards that are viable in Jokers and its OTK version are viable in this deck type, although not all of them are viable. Usually the basic Jokers deck parts fit well here.) 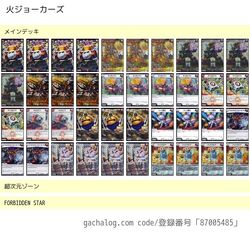 Example of a Fire Jokers build.
Add a photo to this gallery
Retrieved from "https://duelmasters.fandom.com/wiki/Fire_Jokers_(deck)?oldid=387682"
Community content is available under CC-BY-SA unless otherwise noted.