Eve was first introduced in the Star Cross manga.

She is Adam's girlfriend. In ancient times, during a time where humans used creatures for war, she was one of the victims of the war as her parents were killed in the war. Adam cooperated with her to stop the war but failed, causing him to scold god for the war to continue. God then drops an apple to Adam to convert the creatures into cards, but despite the card game has been created, the war continues and Eve was captured by Happening. 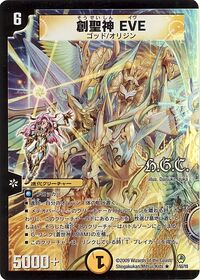 Retrieved from "https://duelmasters.fandom.com/wiki/Eve?oldid=294375"
Community content is available under CC-BY-SA unless otherwise noted.