Emperors of the Gods is a Name Category and God Link of God / Origin creatures.

When Adge, Moora, Mani and Ana were first introduced in DM-32 Evolution Saga, they could form a 4-part god that was Darkness on the left side, and Water on the right side. When Vishu and Suva were later introduced in DMC-55 CoroCoro Legend 7, they were able to be used to create a mono-darkness civilization God creature of all 4 parts. They are the first series of God creatures to be mono-civilization.

The DMC-63 Lunatic God deck was based around using this series of creatures, and featured a Psychic Creature, Suva, Temporal Menace that triggers its Awaken ability when the 4th god is put into the battle zone and god-linked together. After it awakens, it then destroys any creatures in the battle zone without the God race.

Cards that Support the Emperor of the Gods category

Cards supported by Emperor of the Gods 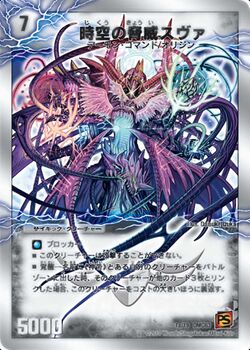 Emperor of the Gods

Retrieved from "https://duelmasters.fandom.com/wiki/Emperor_of_the_Gods?oldid=437204"
Community content is available under CC-BY-SA unless otherwise noted.