Elder Dragon is a race of Dragon creature shared between the Water, Darkness and Fire civilizations.

In Magic: The Gathering, they were a race of highly powerful ancient dragons who were born in Dominaria and were nearly wiped out in the ancient war at the start of the timeline. They would later become the ancestors of all dragons and wurms.

It is only featured on a single multicolored card. 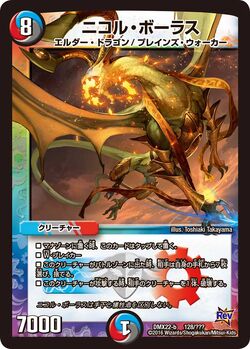 Retrieved from "https://duelmasters.fandom.com/wiki/Elder_Dragon?oldid=458281"
Community content is available under CC-BY-SA unless otherwise noted.